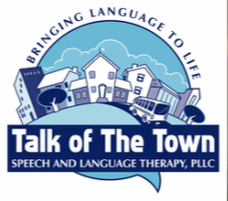 ​I just wanted to let you know that my husband and I are both so thrilled that Dylan will be working with Katie! We honestly could not have imagined Dylan's first session going any better, and both left feeling like Katie is the kind of therapist we have been hoping to find.  She is kind, engaging, and clearly very knowledgeable and good at what she does! Dylan also clearly loves being with her, which is so important to us.

Thank you so much for having us at Talk of the Town, we are so happy to be there with you guys!

​I wanted to thank you for work with Billy. In the (almost) 5 months with Katie, Billy has come a long way and has progressed so much. We have noticed a tremendous difference in him.  Many of our family members have as well!  Our experience with Katie and ToTT has been amazing and nothing but positive.  Not only has Billy's speech improved, but he's become more comfortable with himself in general.  Separation has gotten easier and he's also become a little more outgoing around people he doesn't know

​In January of 2017, we began to suspect that our son was on the autism spectrum. After going through the lengthy and emotional process of evaluations, it was confirmed in March.  To say that 2017 was the worst year of my life would be an understatement.

However, as I look back, there was light and that light was Katie Geyer.  Talk of the Town came highly recommended by a dear friend. Our son began therapy with Katie in February 2017 and we came relentlessly.  She formed a unique bond with my 2 year-old son that I can only say is breathtaking.  In the overwhelming moments when I look at my his overwhelming schedule of programs & therapies and wonder if it’s okay to have him in so much therapy, I draw immense comfort in the fact that he truly loves his sessions with Katie.  There is not a day that he isn’t excited to work with her nor a day when she isn’t excited to see him.

When we go on vacation, we plan it around Katie’s vacation, when we plan our weeks, we plan them around Katie.  Katie Geyer is the most important part of the village we are blessed to have as we raise our precious son with special needs

​When we first started this journey we (or at least I) had many questions about Derick's future; but, after just 8 months we know he will be just fine. Your work with him has been amazing. It seems to have set off something in his brain, and now he's making advancements on a daily basis. It's a true testament to your skill and dedication to your craft.

From our first meeting it was clear how bright, structured, and warm Katie is. In just a few short months RJ has made so much progress!  ​